The History of Granite Falls - 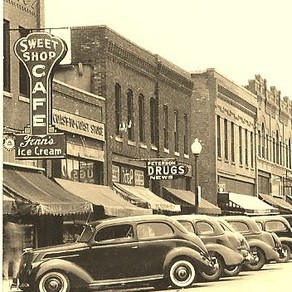 Named for the granite and gneiss outcroppings over which the Minnesota River flows, Granite Falls is a quaint rural town. It is also the county seat for Yellow Medicine County.

The land surrounding Granite Falls and bordering the Minnesota River Valley was first home to the Dakota Oyate Nation. They called it Pejuhutazizi Kapi (the place where they dig for yellow medicine). This tribe occupied the area for thousands of years before the US Dakota Conflict of 1862. At that time, the Dakota were either exterminated, forcibly removed to reservations out-state, or voluntarily fled to avoid harm. Some later defied the state and federal governments and chose to return to their ancient homelands in the Minnesota River Valley. (In 1938, 746 acres of land along the Minnesota River Valley, just south of Granite Falls, was returned to the Dakota Oyate Nation and the Upper Sioux Indian Community was created.)

G.W. Daniels first platted Granite Falls on May 7, 1872. (Daniels later served as postmaster, first judge of probate and ferry owner.) Granite Falls was then incorporated as a village in 1879 and became a city on April 24, 1889.

Henry Hill is the one known for being the founder of Granite Falls, however it was his brother, Thomas Prentice Hill, who first staked claims to the land on the west side of the river. Prentice Hill was also the first to build here, but in 1868 he deeded the claim to his brother, Henry Hill. Henry also shared a deed to property on the east side of the Minnesota River. Henry first built a home on the east side river bluff. Then, with the help of a simple rowboat he began work on a mill and dam on the west side of the river.

When the mill began to operate it become the center of activity for the infant town. The grist mill, and its adjoining saw mill, processed wheat brought in from local farmers and cut timbers into building lumber. The activity attracted settlers from all walks of life and soon businesses and homes started to line up along Prentice Street. Granite Falls was thriving.

Creating a community along the banks of a river has its advantages, but it also has disadvantages. Crossing the Minnesota River was the big disadvantage. A ferry had been established early on but its capacity was limited and it took a long time to put the boat along the ropes. In 1876 the first wagon bridge was built at the north end of town. This bridge served the community well until it was replaced with a steel one in 1911. The original steel bridge remained in service until 1975 when it was replaced with what we drive on today.

Since its inception, the little town of Granite Falls has been witness to much of Minnesota and national history.  The late state senator and former Vice-President, Hubert H Humphrey, can trace his roots back to Granite Falls. His grandmother, Ada J. Register, was a teacher at the local area school built in 1872. But, probably the best known Granite Falls resident is that of Andrew Volstead.

Andrew Volstead was a lawyer who moved his family to Granite Falls in 1886. He first served as the Yellow Medicine County attorney, then as city mayor before becoming elected to Congress in 1903. During his time in office, Andrew Volstead, co-wrote the Capper-Volstead Act which allowed for the creation of farm cooperatives. This Act is still in effect today, however it is not what Volstead is best known for.

In 1919, Andrew Volstead introduced the National Prohibition Act (also known as the Volstead Act) in order to enforce the Eighteenth Amendment which prohibited the production, sale and transport of “intoxicating liquors”. The act was ratified and went into effect in 1920. The prohibition era had officially begun. The Volstead Act was later repealed, ending prohibition in 1933.